Andy is a folk and classical guitarist, music writer & arranger with a wide range of musical interests and skills. He is also a music teacher.

Andy's most recent cd 'Not one but another' contains all original songs and tunes except for two arrangements, one of an African Kora tune, the other of a Middle Eastern one.

Andy often plays gigs in the Norfolk area and in local and National festivals. He has played at The Secret Garden party, Small World festival, Norfolk and Norwich festival, Harlequin fayre, Stainsby folk festival, Norwich Arts Centre, Sainsbury centre for Visual Arts, Wymondham Festival and many more. He has also been in house bands at Dance Camp East and Cambfair.

Andy has written and arranged music for many different genres. Compositions include those for bands, orchestras, strings, brass, choirs, guitar quartets and duos and didactic pieces for teaching purposes. Many pieces are for mixed and unusual combinations of instruments for example, brass ensemble and four clarinets or for tuba, flugal horn, sax and guitar.

Over the last few years Andy has dedicated more time to writing music and arrangements of tunes whilst continuing to work as a performer and teacher of guitar. 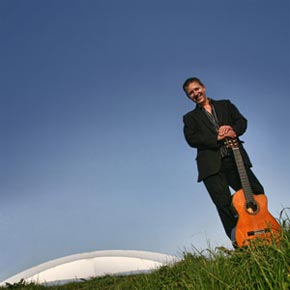