Andy plays original songs and tunes mixed with an eclectic mix of pieces from around the world.

Original pieces deal with issues of friendship and mortality and novel subjects, such as fish and politicians.

His arrangements include Eastern European, African, jazz and folk tunes and are designed to highlight the beauty and lyrical quality of the guitar. Some music is vibrant and virtuosic while other pieces are more gentle and thoughtful. Andy likes to employ novel textures and sounds in his tunes and emulate the overlapping sound of the African Kora. 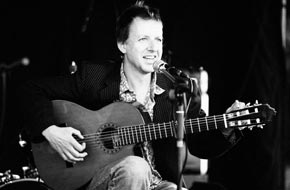